Have you noticed a head-bobbing behavior in your budgies? Do you think the budgie needs something, or is it trying to pass a message? So Why is My Budgie Bobbing Its Head Up and Down?

Male budgies bob their head as a courtship ritual, trying to find a mate or impress the other gender. Budgies also bob their head for other reasons like passing a warning, when they need attention, etc.

Head bobbing is common to male budgies, though females and baby budgies also practice the behavior. Looking for a Mate

Head bobbing is common to male budgies because the most significant purpose of this action is to perform the courting ritual. The male does the head bobbing in this situation and does it to impress the female.

When the mating period approaches, male budgies start looking for females to mate. Female budgies, on the other hand, start examining with scrutiny. To pass the female budgie test, the male must prove he is worth her time and body. 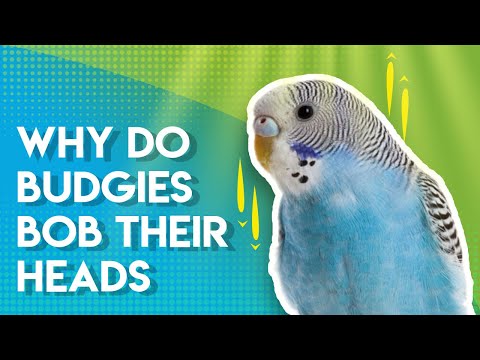 When an intruder enters into the territory of another budgie, the landowner bobs his head as a warning to the intruder, telling him to stay away from his territory. Apart from telling the intruder to back off, it can also start a fight between the budgies.

This territorial aggression is to protect the females, babies, foods, and resources in the territory. When the budgie starts bobbing its head in the presence of another budgie, you should know it does not want the other budgie to stay. You can save both of them from the imminent fight by separating and putting them in a different cage.

Your budgie can also bob its head when it feels bored. Boredom is not good for budgies as they are social birds. They need to be lively and feel the joy of the day in what they do.

When your budgie starts feeling bored, you will see it gently bobbing its head, showing its need to play. You can help it by moving closer and playing with it or giving it a play toy to boost its mood. You can also get rid of the boredom by giving it a companion that will help ease its worries.

Budgies will also bob their head when they need attention. This head-bobbing is common to baby budgies. You will see them bobbing their heads whenever they’re hungry or need something.

Adult budgies will also bob their heads to show they want something or need your attention. They might bob to each other or bob to you to pass their messages. Whenever they bob their head, you should move closer to them and check what they want.

They might need food, water, or other resources. They might also need to play and need your help with that. Whatever they want, you should do well to provide it for them.

Is it Normal for a Budgie Bobbing Its Head Up and Down?

It is normal for your budgie to bob its head. Male budgies like to bob their head, and it is quite a scene to watch. They often accompany the rhythmic bobbing with some chattering, making the scene a complete one.

Why is My Female Budgie Bobbing Its Head Up and Down?

Budgies will bob their head for several reasons. They might bob their head to call for attention, request food, wanting to mate, etc. Head bobbing is always cute to watch, especially when the budgie is doing it for fun.