Do you think your male guinea pig is turning into a female or vice versa?

Is this possible and why do many people think this is the case?

In this article, we’ll debunk the theory of guinea pigs changing genders.

Can A Guinea Pig Change Gender?

No. Although a male guinea pig may retract his testicles, he cannot turn into a female. It’s difficult to distinguish between the sexes when they are less than 3 weeks old, but once they mature, it will be more obvious. The most basic answer to whether or not guinea pigs change gender is a clear and simple, “No.” Why is it such a common question in the guinea pig community?

The truth is that guinea pigs are either born male or female like most of the animal kingdom. The problem is that it’s hard to determine which sex a young guinea pig actually is.

How Can Guinea Pigs Change Sex?

Even though we know that guinea pigs can’t change sex, we may be able to tell if a male has retracted its testicles. It can mimic a female during this time when the testicles are inside the abdomen, but the reasons for this are unproven, but other animals do this as well.

Survival is essential and adaptations can take on many forms including retracting of testicles even if guinea pigs don’t technically change genders.

How Do You Tell If A Guinea Pig Is Male Or Female?

You may not be able to use your visual senses to determine the sex of your guinea pig. It’s time to use your sense of touch and check the genitalia area.

If you don’t feel a protrusion or a bump, the flatter feel may indicate that you are touching a female guinea pig. A male guinea pig could show a line underneath which is their penis.

Older male guinea pigs will be easier to tell with the line protruding outwards and your touch may make it even more obvious.

Is My Guinea Pig Fertile?

Your female guinea pigs may show signs of being fertile within a month or two. Breeding doesn’t usually occur until after the third or fourth month.

After 8 months, the pelvic bones of the female will fuse tighter and make delivery of any potential offspring increasingly difficult if they haven’t bred before then.

Males can breed at 3 months, but they must wait for her estrus cycle which occurs every 13-21 days to be just right for the moment to happen. Due to their overpopulation, breeding is not recommended and separating the sexes during these cycles is a better option. 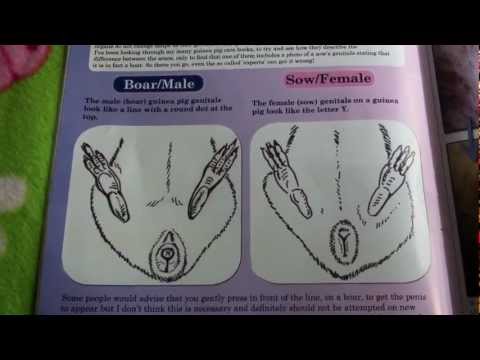 Should I Neuter My Guinea Pig?

Neutering a male guinea pig is easier than spaying a female. Surgery will be required and it will be potentially risky given their small size.

Many vets will recommend separating the males from females instead of performing such a sensitive procedure. Guinea pigs tend not to respond well to being anesthetized and it’s best to avoid it unless there is an emergency.

Even if you notice a male guinea with retracted testicles, it doesn’t mean that he is carrying female sex organs as well. Guinea pigs cannot be hermaphrodites. They will not change genders either.

If you are concerned or interested about your male guinea pig without testicles turning into a female, know that it isn’t possible and the testicles still exist even if you cannot see them.

Should I Get A Male Or Female Guinea Pig?

Too many males in a small space could get aggressive. Make sure you have enough room to add more guinea pigs. Beginners tend to choose males for the added ease and their willingness to be handled.

Female guinea pigs could be more:

With adequate time and bonding, some or all of these undesired traits may disappear. Your female guinea pig may attach herself to you and create a strong bond with only you through time and trust building.

How Do I Care For A Male Guinea Pig?

Male guinea pigs can create a bigger mess. They may toss their bedding around or place their food in different areas. Don’t expect a male guinea pig to simply chew on hay.

Expect some random actions that seem perplexing and untidy. Males are heavier for the most part, but their limbs continue to stay small, fragile and sensitive to fractures.

Since male guinea pigs like to explore more often, they run a higher risk of injury. Males also give out a scent through their gland to mark territory. The more you bathe your guinea pig, the less you will smell it.

How Do I Care For A Female Guinea Pig?

Females tend to be cleaner and they don’t wish to toss around their food or belongings. Females win in this regard and become a popular choice in the long-run for more experienced members of the guinea pig community.

Patience is required to let your female guinea pig adjust to this new space and to you as her new companion. She will not be as territorial and may bond even closer to you than a male.

Guinea pigs cannot change genders. Males can retract testicles, but that doesn’t mean that he is growing female organs. Guinea pigs cannot be hermaphrodites either. They will be born into their gender and you will begin to notice quirky behavioral differences.

Females are more shy at first and easily scared, but they are not as messy or territorial. Males are better for beginners who wish to cuddle with their new companion right away.

Thank you for visiting HomePetHelp.com for information regarding guinea pigs and plenty of other pets that we greatly enjoy caring for. Please check out more articles that may interest you. See you next time!