Are you wondering why your guinea pig is sneezing? Are you thinking Can My Guinea Pig Be Allergic To Timothy Hay?

Have you isolated the cause and you think it could be an allergy to timothy hay?

In this article, we’ll discuss if your guinea pig can be allergic to timothy hay.

Can My Guinea Pig Be Allergic To Timothy Hay?

Yes. Timothy hay can be dustier than orchard, bluegrass or meadow hay. Try switching to a different hay to see if your guinea pig stops sneezing, itching, scratching its nose or wheezing. Does Timothy Hay Cause Allergies?

Timothy hay can cause allergies to humans and their guinea pig companions. Hay fever from wind-borne pollen spreads across timothy hay which can contribute to its allergic effects.

If you notice your guinea pig reacting poorly to timothy hay or refusing to eat it, try switching to other options. Orchard hay is also known to cause allergies while meadow or bluegrass hay could be less allergenic.

What Is The Difference Between Orchard Hay and Timothy Hay?

Both types of hay have about the same amounts of calcium and phosphorus.

What Is The Difference Between Timothy Hay And Regular Hay?

Every type of hay has a point of origin or a name specific to it. Timothy hay grows mostly in European regions closer to the Mediterranean. It’s a perennial grass that is abundant in fiber, but lower in protein.

Guinea pigs can feast on timothy hay without overfeeding on too much protein. Timothy hay is also known as cat’s tail. It’s more calcium and phosphorus rich than alfalfa hay and is recommended to most guinea pigs.

In some cases, your guinea pig may show discomfort or a distaste to timothy hay. Choose from many other options including: 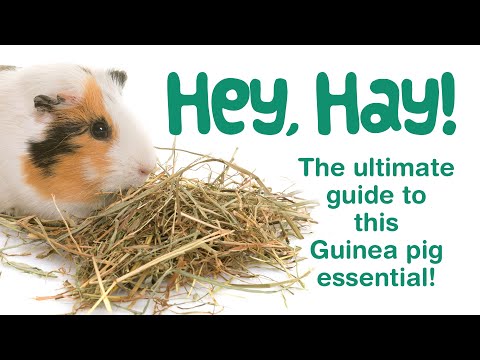 Hay makes up 70-80% of a guinea pig’s diet. Choose between bluegrass or meadow hay depending on it’s availability, cost and ease of transporting or shipping to your home.

Try not to over stock until you know that your guinea pig enjoys it without any discomfort.

How Do I Know If My Guinea Pig Is Allergic To Timothy Hay?

It’s important to isolate the issue first by making sure that other foods or their bedding is not making your guinea pigs feel sick or allergic.

If you see your guinea pig avoiding timothy hay, it may not matter if there is an allergy or not. You need to offer hay that will be ingested and chewed on throughout the day.

If your guinea pig is allergic to timothy hay, you may witness some of the following reactions:

An allergy test from your vet might help you figure out if it’s a type of food or bedding that may influence the allergic reaction instead of timothy hay. Another concern would be whether or not your guinea pig has a URI (upper respiratory infection) instead.

A URI will start in their sinuses and moves to the lungs if it isn’t spotted on time. Your guinea pig isn’t sick with a cold. The URI is similar, but much more concerning.

If your guinea pig has trouble breathing, please visit the vet for a diagnosis before the chances of survival are greatly reduced.

Is Timothy Hay The Same As Timothy Grass?

Yes and No. Timothy hay is greener and higher in protein compared to timothy grass. The hay version is a mixture of leaves and stems that derive from timothy grass.

Timothy hay and timothy grass can be used in the same context when referring to a nutritious source of food for pastural animals and rodents alike. Both terms are interchangeably used when referring to guinea pig food.

What Are Common Things Guinea Pigs Are Allergic To?

Guinea pigs have shown allergic reaction to the following items:

The allergens are identified as Cav p I and Cav p II. In most cases, your guinea will thrive on a steady supply of timothy hay with fresh fruits and vegetables along with pellets as a balanced diet. Make sure your guinea pig receives plenty of vitamin C as they are known to be deficient in this vital source of nutrition.

An allergic reaction to timothy hay is more common in humans than guinea pigs. The dust or pollen content in this type of hay may be the reason why you are seeing your guinea pig sneezing, wheezing, scratching or avoiding it altogether.

Thankfully, you can easily switch out timothy hay for substitutes like orchard, bluegrass and meadow hay. Please consult with a professional if symptoms persist and eliminate the odds of other sources causing any internal issues for your guinea to live happily in your home.

Thank you for visiting HomePetHelp.com for information regarding guinea pigs and plenty of other pets that we greatly enjoy caring for. Please check out more articles that may interest you. See you next time!