Have you seen a black budgie before?

Have you ever wondered what a black budgie would look like?

Are they even real?

Can you get a black budgie? Yes, Black budgies do exist. In fact they are called anthracite and blackface budgies.

Budgies are known to be cute, little, colorful birds with long tails. These birds live in the wild grasslands, but they can be domesticated.

If you have stayed close to budgie before or read about them, you will discover that they are gentle, friendly, playful, and sweet, and this personality of theirs has made them the third most common pets in the world after the dog and cat. Their charming personality makes them the sweetest companions you can ever have.

Can You Get a Black Budgie?

Generally, budgies have a variety of colors, but they are of two main types; the traditional budgie and the English budgie.

The traditional budgie is the natural budgie with black stripes on yellow and green color, tail feathers with a mix of blue-black, accessible, and flight, while the English budgie includes all crossbreds. It is the mutation resulting from the crossbreeds that give rise to a variety of colors.

Can Budgies Be Black?

Black budges are very rare. Presently, there is no record of a black budgie anywhere, but there are very dark shades of budgies with thick black stripes resulting from a mutation known as Anthracite.

Anthracite is gotten from crossbreeding budgerigars with blue-base and dark grey body feathers. 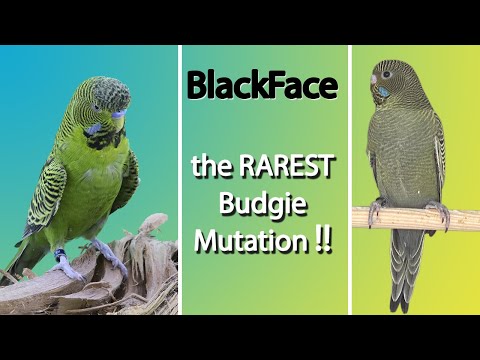 Getting a budgerigar with solid black color might be very difficult, if not impossible because crossbreeding has been on for years. Yet, the closest breeders have ever gotten to a black-colored budgie is the double factor Anthracite black.

It is obtained from crossbreeding a blue-base and black face bird. The dual-factor Anthracite is not common because someone selectively bred it, and because of its uniqueness, I am not sure the owner would want to release it, except he has groomed plenty of them.

Where Can I Get a Black Budgie?

You cannot get a black budgie from a budgie market. It can only be obtained from selective crossbreeding of double factor Anthracite and blue-based birds. However, this experiment does not guarantee that you will have a solid black color bird formed.

During meiosis, the transfer of color pigmentation in birds occurs, and the process cannot be controlled.

Since gene transfer during meiosis cannot be regulated, a dark-colored bird might have yellow as a recessive color pigment, and it can be transferred during meiosis.

Hence, it becomes difficult to get a solid black-color bird. So, if you are interested in owning one for yourself, you should try experimenting with using birds with dark color pigmentation in their genes while hoping you get positive results.

Blackface budgies are very rare. Records show that they were first bred in the Netherlands by a breeder in the 90’s who crossbred two bluebirds with unusual markings on their bodies.

The black face was said to have been kept together instead of distributing them, and sickness broke out, killing all of them. Most people believe that it would be challenging to find blackface budgies today, especially outside Nether lands.

However, since blackface budgies existed before, there is a high possibility of creating them again. A crossbreed between dark-colored birds and blue face birds can result in another blackface breed if carefully carried out.

Blackwing budgies are rare. They are gotten from an excessive presence of melanin pigment in the wing of budgies, causing their black markings to be bigger than usual.

Some people believe the black wing is a result of gene mutation, while others believe it comes from the selective breeding of birds with black markings on their wings.

However, both arguments might be correct, judging that gene mutation is possible, and selective crossbreeding is possible too.

The easiest way to get a certain quality you require in a bird is to crossbreed birds that already have those qualities. For example, it would be easier for you to get a Blackwing bird when you breed two Blackwing birds.

Creating the colors from scratch might be tricky because you are not sure of the outcome of the gene transfer during meiosis.

What is the Rarest Budgie Color?

The rarest budgie color is the dark charcoal grey color. This mutation is generally referred to as Anthracite and is wildly accepted as the rarest color of budgies.

Anthracite originates from Germany and is known to be local there. Hence, anyone outside the country who wants to have the anthracite budgie imported from Germany.

Other rare budgie colors asides from the anthracite color include the black face, texas clear body, rainbow, purple, lacewing, fallow, and clearwing budgie. With time, these are beginning to get common.

Can You Breed Black Budgies?

Well, there is no record of a black-color budgie breeder at the moment because no one has been able to come up with it.  So, no one can say for sure if you can breed a black budgie.

Most people believe that it is impossible to breed a black budgie. Their reason being that crossbreeding has been going on for years, and nothing has happened.

However, the moment anyone successfully gets a black mutation of these birds, it becomes possible to breed one with a continuously controlled experiment.

Presently, there are no black budgies. However, budgie breeders are carrying out several selective experiments to see if they can arrive with a solid black color budgie.

This experiment can be painstaking and requires a lot of time to carry out. If you are interested in having a black budgie, consider experimenting yourself. Who knows? You might be the lucky fellow to produce the first black budgie.