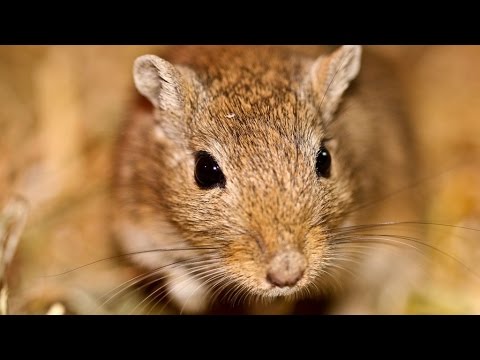 Gerbils make great pets, but have you ever wondered if gerbils live in the wild?

Gerbils live in the wild in the Middle East, Africa, Asia and North America, There are just over 100 known species of gerbil currently living in the wild.

Below is an intresting video I found of gerbils living in the wild.

Pet gerbils are nocturnal so typically sleep during the day, in the wild they are diurnal which means they sleep at night time.

Wild gerbils are commonly found in sandy plains / deserts in Middle East, Africa and Asia.  They have sharp claws which they use to build massive tunnels to live in.  They will spend most of the time in their tunnels and will only come out to eat and find water to drink.

Wild gerbils will typically live in groups of up to 20, If they live alone they will get lonely and depressed.

How Long Do Gerbils Live In The Wild? As you can image their lifespan is shorter in the wild than in captivity because of threats such as predators, lack of food and water and more likely to develop diseases, So how long do gerbils live in the wild?

A wild gerbil will have an average lifespan of between 3 – 4 months. The lifespan will be greatly reduced because of threats such as predators and lack of food and drink.

If the gerbil can avoid predators and has a good supply of food and water they should have no problems to live between 2 – 3 years.

Their lifespan is still short if you compare this to a gerbil in captivity which has lifespan of 2 – 5 years.

What Do Gerbils Eat In The Wild? Wild gerbils will typically eat vegetables, fruits, Seeds, leafs, grass and herbs.  They have also been known to eat insects and other small meats such as meal worms, but this is considered unusual.

Gerbils will typically gather food during the day and store it in their tunnels.

How Much Do Wild Gerbils Eat? Gerbils do not need much food, typically they will eat around table spoon of food a day.

What Are Wild Gerbil Predators Because gerbils are quite small they will have a lot of predators in the wild.  The main predators are

The main predators for wild gerbils are humans, snakes and birds. Yes that’s right humans. Many humans like to shoot gerbils for fun and we also place traps out near our homes to catch them.

Other predators will include

We typically see rodents as vermin and this is why we are one of their main predators.

They are also a perfect snack for a snake and a bird of prey.

If a gerbil detects a predator it will stomp its feet and make a noise to communicate with near by gerbils that a predator is near by.

Gerbils have very strong legs which means that they can jump very high to get away from predators, they can also shed their tail if this also helps them to escape.

What Is A Wild Gerbils Natural Habitat Requirements? Gerbils typically live in very hot places (sandy plains / deserts) which will have extreme heat during the day, and is very cold at night,  so it is important for them to find somewhere that they can borrow down far to get away from these temperature conditions.

Food and vegetation is hard to come by in dry climates so a gerbil will need to be resourceful and skilful to locate food and water. The most common vegetation they will be able to find is grass and shrub’s.

They will get most of the water they need from eating foods such as grass / shrub’s and fruit.

Ideally they will create a nest in grass or shrub’s as this will keep them hidden when they come out of their borrows and will hide them from predators.

Does A Wild Gerbil Hibernate? Many animals will hibernate when the weather is excessively cold, But does a wild gerbil hibernate?

A Wild gerbil does not hibernate, It will go in to a hibernation like state if the temperature is below 55 degrees.  This just means they will be more lethargic than normal.

In cold conditions they will require more food to survive. In this situation the gerbil might leave the nest to go find food during the day and not during the night time.

Do Gerbils Live In Deserts? Gerbils do live mostly in deserts in Middle East, Africa, Asia and North America.  Due to the very hot conditions they will dig deep burrows to escape the heat during the days, and cold during the night.

Gerbils require very little water to survive and they have also developed the ability to process water very efficiently which has improved their survival rate.

What Do Gerbils Eat In The Desert? They will eat mostly grass and shrub’s but they will also eat small insects, plants and fruit

Where Do Gerbils Get Water In A Desert? Wild gerbils will get most of the water they need from eating foods such as grass / shrub’s and fruit.  In the desert there is water stored underground so a gerbil might smell the water and borrow down to it.

Wild gerbils can cause considerable damage to a property which includes chewing through wires and walls, digging unwanted holes, damaging cars as well as lots of other things. If you come across a wild gerbil are they dangerous?

Wild gerbils are not dangerous because of their small size.  You should never try to handle a wild gerbil because they will bit you and they have sharp teeth.

They are also know to carry many unpleasant diseases which I will cover in the next section.

Can Gerbils Transmit Diseases To Humans?

Gerbils live in groups of up to 20 in the wild, so diseases are very easily spread among them, But can gerbils transmit diseases to humans?

Gerbils can transmit the diseases they are carrying to humans. Remember the black death? This was a plague which gerbils carries and spread to humans.

The most common diseases they will get in the wild include

If you are aware that gerbils have been nesting somewhere like in a shed it is very important to move them on and fully clean the area that they were in.

How Do Gerbils Survive In The Desert?

Gerbils have evolved to living in very hot conditions, They require very little water intake because they have developed a highly efficient way to process the water in their systems.

Gerbils will dig deep tunnels which enables them to escape the extreme heat during the day and cold during the night time.

They will typically only leave their nests to look for resources. They will usually sleep during the day and go out at night time looking for food and water.