Have you noticed blood around your gerbil’s nose? Are you worried it might be in pain? Read on to find out the common causes and treatments for a bloody nose. Why Does My Gerbil Have A Bloody Nose?

It is most likely that your gerbil has some reddish-brown pigment on the nose which might be mistaken for blood. In this case simply clean it with some water. If it really is blood, your next step should be going to the vet.

Why is my gerbils nose red?

Porphyrin is a blood cell component which under times of stress can be deposited in tear ducts, around eyes and nose again, causing irritation.

Let’s look at these one condition at a time:

Both these conditions cause hypersecretion of Harderian glands (located in eyes). The secretions of these glands contain porphyrin which accumulates near nostrils and eyes causing irritation. This irritation causes the gerbil to self-mutilate and predispose itself to secondary bacterial infections.

Porphyrin deposition: Porphyrin is a pigment. It is what causes the red colouring of blood. During stressful times, unbound porphyrin is laid down in tear ducts that causes red stains around eyes and the nose. These can often be mistaken for blood but must be differentiated.

What causes a bloody nose?

The porphyrin deposits we talked about earlier can lead to a bloody nose. This pigment is laid down on the nose and eyes which causes itching. This makes the gerbil scratch the nose to relieve the itching. Sometimes, the scratching is so incessant that it can draw blood leaving open sores, scabbing, redness and hair loss. The sores predispose the gerbil to secondary bacterial infections.

Here are some things you can manage to prevent your gerbil from reaching this hurtful state:

What do you do if your gerbil has a bloody nose?

It is best to take your gerbil to the vet if it has a bloody nose. The veterinarian will wipe the porphyrin deposits and blood. Thereafter they will apply some topical medication to reduce itching.

If the condition is worse than expected, they may use local antibiotics for the nose as well as systemic antibiotics to prevent or treat systemic infection.

You as the pet parent need to investigate the cause and rectify it. Start by providing appropriate humidity and temperature to your gerbil. You might have to isolate it in a multi-gerbil household. You may think of providing supportive diets to fulfil its nutritional requirements.

You may also have to change the amount of space your gerbil gets. Remember, even the stress of weaning can lead to this condition.

Why do gerbils bleed?

Gerbils can bleed sometimes and they’re all reasons to be concerned. Practice first aid at home and take them to the vet as soon as possible. There are 4 main locations where bleeding can occur:

A common misconception is that female gerbils bleeding at the base of tail is a sign of menstruation. They are not like humans and don’t shed the uterine lining. They absorb it instead. Thus no bleeding occurs during ‘gerbil periods’.

In males however, bleeding at the base of the tail can be a sign of fighting within the group. The solution is to separate the rejected gerbil from the horde.

As discussed before, a lesion on the nose or eyes is caused by either nasal dermatitis or porphyrin deposition. You could try localizing the cause (perhaps bedding, diet, space etc) and see how the gerbil reacts. If the itching and irritation continues, it would be wise to take your gerbil to the vet.

The underbelly of your gerbil has a little scent gland right in the middle. This is a common location for tumours to develop due to excessive territory marking behaviours. If the underbelly is bleeding, it may be because of a tumour of the scent gland or an open injury due to trauma or fighting. The solution to this would most probably be surgery.

Around an abscess anywhere on the body

If your gerbil had a wound on its body which has now swollen and is bleeding, this could mean that an abscess is bursting. This location could’ve been a wound that is now infected. You would require antibiotics to treat an abcess. 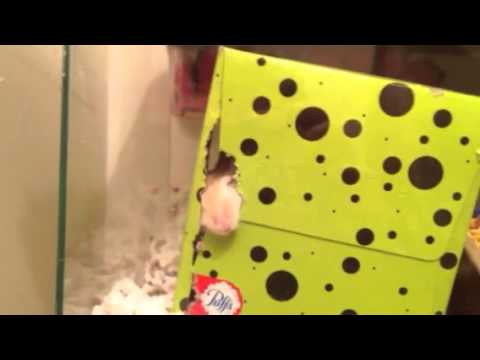 If your gerbil is bleeding or you find an injured gerbil, use some first aid before you rush it to the vet. Find the wound that is bleeding and disinfect it. Take a Q-tip or a cotton swab, dip it in some disinfectant and wipe it around the wound.

Don’t directly stab the wound as it may worsen the bleeding and cause pain to the little fellow. Get rid of any dirty bedding and lay down some clean towels to rest your gerbil on. Proceed to a vet right after.

Does my gerbil have a nose infection?

Has your gerbil been scratching at its nose a lot lately? Do you notice any redness or bleeding? If your answer is yes, it is most likely  a nose infection.

Some signs that point towards a nose infection are:

In early cases, it is mostly the nose that is infected. In chronic cases the eyes can get involved and then the rest of the head, forelimbs, chest and abdomen. Therefore, it is important to recognise the signs earlier on and get them immediate treatment.

Your gerbil should receive appropriate antibiotics from the vet if it has an infected nose.

Continue Reading
link to Why Is My Guinea Pigs Pee White? {Is It Normal, Are They ill}