If you own a guinea pig, you have probably had to deal with foot spurs at some point.

If you are new to the world of guinea pig ownership, finding spurs on your guinea pig’s foot can be a strange sight.

But it is nothing to be alarmed about. Spurs are harmless. They can be easily removed. Read on for all you need to know about what spurs are, what causes them, and how to remove them.

What are Guinea Pig Foot Spurs? Spurs grow on a guinea pig’s front feet. Although they are harmless, they can get caught on rough pieces of straw bedding, or on cage wire, causing them to tear. This might lead to cuts, and then infections. Read on for more information about what to do about what causes foot spurs, and how to remove them. 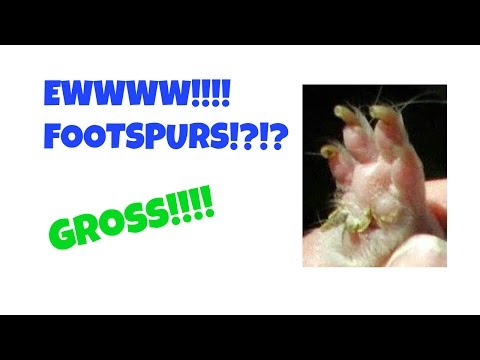 What Causes Spurs on Guinea Pigs?

Guinea pig foot spurs have any of a few causes. They could be genetic, but they might also be caused by lack of proper care, or lack of exercise and activity. They are not caused by the bedding or hay in a guinea pig’s cage.

Should I Try to Remove Guinea Pig Foot Spurs?

You don’t have to remove the spurs from a guinea pig’s foot. They are harmless, and will fall off by themselves. If the spurs are long and beginning to grow curly, and becoming unmanageable, or it is hard for your guinea pig to walk, then you can and should remove them.

If the spurs are long, there is more danger of them getting caught on something and tearing. You do not want your guinea pig to be uncomfortable, or to have trouble walking. So, while spurs don’t present any initial problems for guinea pigs, it is best that you keep them well managed by removing them when they start to get out of control.

If you are worried, you can remove the spurs at any point, whatever size they are. It won’t trouble your guinea pig to have spurs removed from its feet, even if it doesn’t need to. If it gives you piece of mind, remove the spurs whenever you see them.

How to Get Rid of Guinea Pig Spurs?

To remove guinea pig spurs, all you need are a pair of nail scissors or clippers. Be gentle when trimming the spurs off a guinea pig’s foot. It shouldn’t hurt them; it should be just like removing an extra-long toenail. It is a good idea to get rid of spurs as soon as possible.

If you are worried about doing it wrong, that you won’t get rid of the entire spur, or if you are worried that you might accidentally hurt your guinea pig’s foot, visit a vet, and they should be able to remove the spur for you. It is a fairly straightforward task, which you will soon get the hang of.

What Do Normally Healthy Guinea Pig Feet Look Like?

A normal guinea pig foot has four toes in the front foot, and three toes in the hind foot. Occasionally, guinea pigs, just like humans, are born with an extra toe, or with toes stuck together, also called webbing. Guinea pigs have pink coloured feet.

The condition of having extra toes is called polydactyly. It is abnormal, but harmless. A guinea pig with this condition is still healthy. They might require surgery, though, if the extra foot causes discomfort or makes it difficult for them to walk.

Spurs are normal and common. They are not a sign of infection. So, if you see a spur on your guinea pig’s foot, it is nothing to be alarmed about health wise.

Your guinea pig is likely very healthy. And if you keep taking good care of them, giving them good, healthy, green vegetables, lots of water, while also cleaning their cage regularly, and making sure there are not any dangerous objects in their bedding, then your guinea pig should continue to have healthy feet.

Spurs, while not dangerous, and not a health concern, can become a problem, and should be removed.

A healthy guinea pig foot should look as close to a normal foot as possible. That means no spurs, it means dressing cuts and abrasions, and it means that if you think there is something wrong, such as an infection, that you contact a vet as soon as possible.

If guinea pigs live in filthy cages, with excess urine and faeces on their bedding, or if they walk on rough and coarse surfaces, such as wiry hay, carpet, or metal wire, they can get what is called bumblefoot, which is a staph infection.

To avoid this happening, keep cages clean, removing and replacing straw regularly. If you are concerned that a harmless spur is something not so harmless, you should get to your local vet as soon as possible to rule out anything more serious.