Having a new guinea pig can be scary if they care constantly gagging.

You worry about them constantly. Guinea pigs are known to gag or choke from time to time. Maybe this has happened to you.

Don’t worry. We’ll try to answer all your questions here.

Why is My Guinea Pig Gagging?

It is common for a guinea pig to gag because unchewed food typically gets stuck in their teeth at the back of their mouth. The guinea pig will make a gagging noise to clear the food from their mouth.

Guinea pigs have teeth in the back of their mouths that they use to chew food into an extra soupy paste before it is digested. They chew their food into this paste, which is stored in the back of their mouths. This can sometimes get lodged their throat’s. But it can also be a sign that a guinea pig is having trouble with its back teeth.  You may need to see a vet if the problem persists. Another reason guinea pigs might gag is that they have an object, such as a piece of food, a bit of hay or a hairball stuck in their throats. Guinea pigs will gag or cough up whatever is in their throat. Sometimes, if an object is very large, it may block their airway and this is when they can start to choke.

Guinea pigs lack the ability to vomit up food from their stomachs as humans do. They will gag and cough up objects instead. Sometimes it can look like a guinea pig is throwing up, but it is really coughing up the soupy paste from the back of their mouths. Don’t panic if your guinea pig makes gagging noises from time to time. 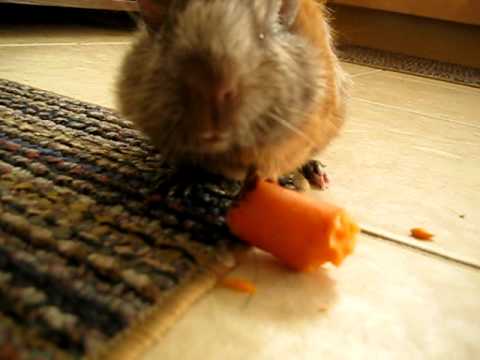 What Do I Do If My Guinea Pig is Choking?

If your guinea pig is choking it could just be that they are coughing up a hairball or gagging at a tiny bit of food. It could mean that something is stuck in your guinea pig’s throat and cannot be dislodged. But it could also be a sign of serious respiratory problems, in which case you will need to visit a vet.

If your guinea pig is choking on something, here’s what you need to do.

Be careful you don’t injure your guinea pig.

Holding them upside down and giving them a shake is the quickest and easiest option here. Of course, you can avoid having to do all this if you make sure there are no large pieces of food, hay or any other objects in your guinea pigs cage that might be a choking hazard. Clean out their cage regularly and feed them only small pieces of food.

A choking guinea pig sounds a little like a cat coughing up a hairball. When guinea pigs choke they make coughing and gagging noises. They might sound like they are hiccupping or spluttering. It is helpful to know when a hiccup or cough turns into something more serious. If your guinea pig is making a wheezing noise talk to your vet. It might be respiratory problems.

If you hear your guinea pig making coughing or gagging noises check it to make sure there is nothing in their throat. You will soon get to know all the sounds your guinea pig makes.
As mentioned above, it could be a sign of teeth problems, so contact your vet if this persists.

Why is My Guinea Pig Gasping for Air?

Always seek expert advice from a trusted vet if you are concerned. If your guinea pig is choking, follow the steps above to dislodge any objects from their throat.
It could also be the symptoms of a fever, or maybe more serious respiratory conditions.

These can be potentially deadly, so it is important to seek medical advice.

Do Guinea Pigs Cough Up Hairballs?

Yes. Guinea Pigs groom themselves in the same way cats do. Guinea pigs secrete a milky fluid from their eyes, which they use as a cleaning agent. They rub it on their paws and lick their fur. This can result in them ingesting balls of their own fur. These are usually digested; but some of it can get stuck in their throat.

They will cough this up when they need to. Don’t worry. Guinea pigs are designed to do this. It is natural and normal for them to clean themselves which means it is natural and normal for them cough up fur. Just as cats do, guinea pigs will make gagging noises and cough up the furballs. You will soon get to know the difference between regular coughing and gagging and more serious choking.

Can Guinea Pigs Choke on Water?