If you own a guinea pig, you might have noticed them grinding their teeth from time to time. Teeth grinding is called bruxism. There are a few reasons guinea pigs might do this.

Guinea pigs will grind their teeth when they are in pain.  The pain will most likely be caused by a dental problem or something that is stuck in their teeth.

The main reasons guinea pigs grind their teeth include

Pain : Which could be the sign of an infection or dental problem. You should see a vet about this.

Digestive Issues : Guinea pigs are unable to vomit, as they lack the muscles that humans have that allow us to regurgitate food up from our stomach. A guinea pig might grind its teeth in response to gastro-intestinal pain. If this persists, you should visit your vet.

Be careful not to feed your guinea pig too much of certain foods. Foods like broccoli can produce a lot of gas in the digestive system, resulting in bloating, which can lead to your guinea pig grinding its teeth to cope with the discomfort.

Defensive Mechanism : Guinea pigs may also grind their teeth for the same reason that cats hiss: because they are annoyed at a cage mate, a human, or another animal, or as a defensive mechanism against a fellow guinea pig or a larger animal.

If a guinea pig grinds and chatters its teeth it means it is about to fight another guinea pig.

The below video shows you a guinea pig grinding their teeth 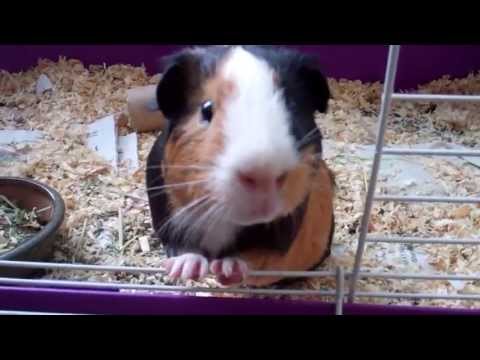 Is it Normal for Guinea Pig’s to Grind Their Teeth?

Yes and no. It is normal in the sense that every guinea pig does it, and it isn’t harmful necessarily. But it isn’t normal if they are doing it excessively and for no apparent and obvious reason.

It could be completely harmless, or it could be the sign of a much greater problem. If you are concerned, you should take your pet guinea pig to see a vet.

How Do You Tell if Your Guinea Pig Has Teeth Problems?

Guinea pigs are rodents. This means that they have teeth that continuously grow. They need to chew or gnaw on objects, such as wood, to saw their teeth down so that they do not become overgrown.

One sign that guinea pigs are having teeth problems is that they are not gnawing enough, which makes their teeth overgrown, causing gum problems. Look out for overgrown teeth. We cannot say this enough. Contact your vet if you have any concerns.

Guinea pig teeth should be white, not yellow. Look out for this, and for anything else that you think is not normal: such as missing teeth, chipped teeth, or if your guinea pig’s teeth are falling out. 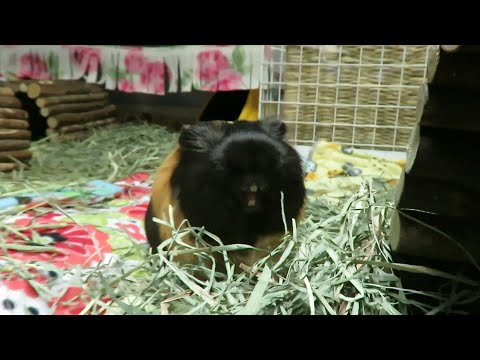 Why Does My Guinea Pig Grind His Teeth When I Pet Him?

If your pet guinea pig grinds his teeth when you pet him it could be any of the signs mentioned above. He might just be annoyed at the constant attention. Or he might feel unsafe, using the grinding as a security shield or defensive mechanism.

If you treat your guinea pig right and take good care of him then he is unlikely to feel unsafe around you. The problem in that case might be more serious, such as dental issues, gastro-intestinal issues, or some other health concern. Visit a vet to rule anything out and to seek treatment for whatever it is that is troubling your guinea pig.

Occasional grinding is normal. But excessive grinding for no apparent reason should be looked into. A vet is the best person to help you with this and any other more complex questions.

Guinea pigs might also become scared around noisy children, or larger pets such as dogs and cats. They might grind or chatter their teeth to indicate annoyance in these situations. It is your guinea pig’s way of saying it is annoyed or scared, and that whoever is scaring it should back off.

Is it Normal for Guinea Pig’s to Grind Their Teeth While Sleeping?

No, it isn’t normal. It could be a sign of a more serious problem, such as those discussed above. If it persists you should contact a vet.

Why Does it Sound Like My Guinea Pig is Chewing?

If it sounds like your guinea pig is chewing, but it isn’t eating any food, it could be that it is grinding or chattering its teeth. The reason for this might be any of those discussed above. If your guinea pig does this only occasionally, around other guinea pigs, it could just be a sign of annoyance.