Are you considering putting Guinea pigs and Hamsters together? Can these two pets get along? Here, I’ll teach you everything you need to know.

Guinea pigs and Hamsters don’t get along and putting them in the same cage isn’t a good idea. They differ in their territorial habits, instincts, and nutrition. Thus, they can’t get along.

Can Guinea Pigs and Hamsters Live Together?

Guinea pigs and hamsters can’t live together. Although they are both beautiful little pets, they have different body sizes, behaviour, and social habits. These and some other factors are why they are incompatible to live together.

Keeping two rodents like this of different families and species in the same cage might result in issues and consistent conflict.

Many people believe that guinea pigs and hamsters should live together since they’re both rodents. Unfortunately, that is not true.

These two pets might look alike, but they differ a lot. The following are some of the reasons why you shouldn’t put hamsters and guinea pigs together: 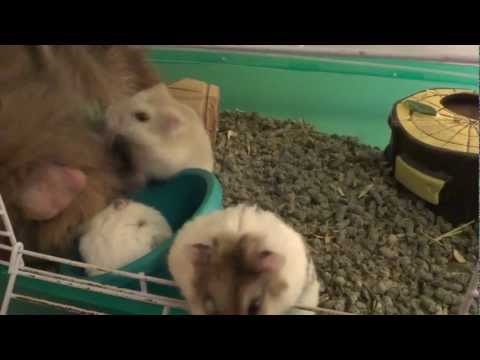 If you put two humans with different attitudes in the same room, there’s the possibility of having an “everyday conflict” because they aren’t compatible even though they are both humans. It is the same when it comes to hamsters and Guinea pigs.

They are rodents, but their behavior differs; thus, they are incompatible to live together. Hamsters are hostile, while guinea pigs are calm. The hamster’s hostility might be incompatible with the quiet and sedentary personality of guinea pigs, resulting in conflict.

Hamsters and Guinea pigs might fight over food or space when kept together. Such physical conflict isn’t fair, considering their size differences. Being the more miniature pet hamster might end up injured.

Moreover, rodents like to hoard food; hence, if you put these little pets in the same cage, they might have problems hoarding food in their desired corners. Such discomfort might result in conflict. Therefore, it isn’t a good idea to make guinea pigs and hamsters live together.

Guinea pigs are larger animals than Hamsters. Therefore, they require different cage sizes. Keeping Guinea pigs in a small cage meant for hamsters might spell discomfort, which isn’t suitable for your beautiful pet.

Hamsters are nocturnal animals; therefore, they sleep during the day and active at night. Guinea pigs, on the other hand, are diurnal; hence, they are more active during the day than at night. Should the two animals live together, they’ll interfere with each other’s sleeping routine.

Hamsters need wheels to exercise, but Guinea pigs don’t. If the two pets live together and the Guinea pig tries to play with the hamster’s small wheel, it might break its back or break the wheel. Thus, these two animals are incompatible and can’t stay together.

Do Guinea Pigs and Hamsters Have Similar Needs?

Guinea pigs and Hamsters are different animals of different species; hence, they have different needs. They require different cage sizes and different meal types. You also have to clean piggies’ cages more often than Hamsters’.

Although these beautiful pets both require fresh food and water, plus lots of playtime and attention, they also have ample dissimilar needs. For instance, hamsters can do well in a smaller cage or even small aquariums. Guinea pigs, on the other hand, need something larger.

They live well in larger cages, especially if they’re in pairs. Such a cage allows them to explore a larger area since it is what they like.

Both pets require exercise to stay healthier, and an exercise wheel is enough for hamsters in this regard. However, Guinea pigs play with toys as well but need something more for exercise. They need some time outside their cage to stretch their legs and explore a larger area.

Doing so will make them healthier and happier. More so, being a larger animal, guinea pigs require a more frequent nail trim.

Their nutritional needs differ as well. Guinea pigs are herbivores; thus, they need basic diets such as hay and fresh water. They also need fresh vegetables like red leaf lettuce, bell peppers, and cucumber. Hamsters, on the other hand, are omnivores. Hence, they can eat plants and insects.

Unlike guinea pigs, Hamsters can survive on different kinds of foods, including grains, nuts, seeds, fruits, insects, and vegetables.

Can a Hamster and a Guinea Pig Mate?

Hamster and Guinea pigs cannot mate because they are rodents of different species. The Guinea pig has a larger body mass than the Hamster; thus, any attempt of a male Guinea pig to mate a female Hamster might result in severe injury or death of the Hamster.

Besides the larger body mass, Guinea pigs and Hamsters will not agree to be in the same cage, not to mention mating.

For mating to occur between two animals, they must first have a mutual relationship and be willing to stay together. That is not the case with these two rodents.

Once you put them together, it only takes a few minutes, or maybe immediately in some cases, for conflict to erupt between them.

With such incompatibility, behavioral differences, and intolerance, there can be no intimate relationship; therefore, these two rodents cannot mate.

Can a Hamster Kill a Guinea Pig?

Hamsters can kill guinea pigs if left together for long. The former is endowed with sharp teeth and strong jaws, which they can use to inflict injury on the latter. Complications from such injury might eventually result in death.

Although hamsters are smaller animals than guinea pigs, they have two incredible features that could make them kill the other rodent — aggressiveness and sharp teeth with strong Jaws. With their hostility, hamsters can quickly lose patience.

Some Hamster species have this “fight to death” ideology which they display towards other species, and guinea pigs aren’t an exemption in this regard.

With such ideology, coupled with their sharp teeth and strong jaw, Hamsters can kill guinea pigs by inflicting severe injury. With such injury, the giant pet will be weakened, and the little one can inflict more harm until it eventually dies.

What Lives Longer a Guinea Pig or Hamster?

Guinea pig is one of the rodents with the longest lifespan. Some species of these little pets can live up to double digits; hence, if you’re planning to adopt this beautiful pet, you should be ready for a long-term commitment.

On the other hand, hamsters only live a few years, usually between 2 and 2.5 years.

However, some factors might shorten the lifespan of a guinea pig, such as poor diet, sickness, unhygienic environment, unclean water, etc. These same factors also apply to hamsters. Therefore, to ensure that your beautiful pet lives to the fullest, you should provide them with their essential nutrients through foods and supplements.

Keeping their home clean and ensuring they engage in regular exercise can help as well. More so, you may want to consider providing ample enough living space for your guinea pigs. Doing so can help to prolong their lifespan.

Can You Keep a Hamster in a Guinea Pig Cage?

You cannot keep a hamster in a guinea pig cage because a guinea pig cage has a larger space through which your little Hammie can escape. It might get stuck in the large space, and that might inflict injury to your beautiful little pet. Guinea pigs are larger pets, so is their cage and the space in it. When you keep your little Hammie in such a cage, it might escape, and you might not find your beautiful pet again. However, It may be unsafe to keep hamsters in a guinea pig cage, but you can convert the cage to accommodate a hamster.

All you have to do in this regard is to cover the cage with wires or mesh. That will help to cover up the large space between the rods that makes up the cage. You can then safely keep your hamster in it.

Hamsters will feel more comfortable in such a cage than the small-sized one meant for them. The larger cage means they can run around, climb, and hide as they desire.

What Smells Worse a Hamster or a Guinea Pig?

Hamsters smell worse than guinea pigs. However, this doesn’t mean the pet naturally stinks. Instead, it means that its urine and poops stink more than that of guinea pigs.

The foul smell of hamsters poops and urine is primarily due to the kind of foods they eat. They are omnivores and have ample option of meals to eat. Guinea pigs, on the other hand, are herbivores; thus, they only take simple meals such as vegetables. Such meals digest quickly, with minor odor.

Since Hamsters consume more complex food that requires more digestion time, their poops and urine tend to stink more. This is why many refer to them as one of the smelliest pets, but the animal itself doesn’t stink; their environment does.