Do you have more than one gerbil, and you intend to put them together? Can this beautiful little pet peacefully stay together? Here, I’ll walk you through everything you need to know.

Gerbils are social animals and prefer to live in groups. It is recommended to keep between 2 and 4 Gerbils to prevent unnecessary competition and everyday conflict.

Do gerbils need to be in pairs?

Gerbils are social animals and love to be in pairs. They love to be in the company of other gerbils, and leaving this little creature to live alone could make them feel lonely, which could eventually lead to depression.

Gerbils need companions to stay happy. In the wild, you rarely find a single gerbil staying alone; instead, what you’ll find is a group of gerbil all residing in a single colony. There, you can find different generations, including the parent, grandparent, and little Gerbils.

Therefore, if you put your Gerbils in a cage, it is better to put them in pairs. Even if you play with your gerbil and get it the best housing and several pet toys, it’ll still be lonely if it had no companion around. This beautiful little mammal doesn’t derive happiness in being alone; instead, they become happy when in the company of other gerbils. They need others to talk to and to curl up with when they sleep.

Pet owners often get confused sometimes seeing Gerbils fighting one another after putting them together. They assume the Gerbils want to be left alone. This isn’t true. This animal doesn’t like intruders which could be why it fight a new fellow in its home, but it doesn’t mean it want to be alone. Therefore, if your Gerbils fight each other, it means they are yet to know each other. Therefore, they’ll get comfortable being together as time goes on.

Will gerbils kill each other?

Like other animals, Gerbils fight, and this could be for several reasons, including dominance and competition. However, in rare cases, the fight could be severe, leading to the death of either or both of the creatures. 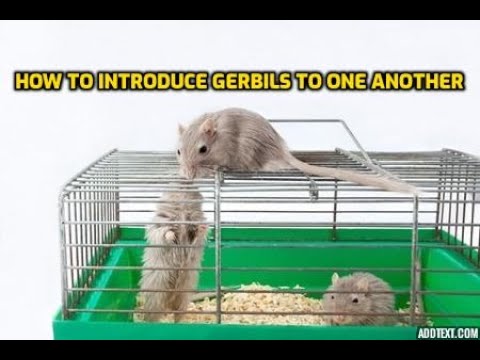 It is uncommon to find Gerbils fight to death in the wild, but it is possible when they’re held captive in the cage. In the wild, the defeated gerbil will often take to its heel, avoiding severe injury and death. This isn’t the case with Gerbils in the cage.

They have nowhere to run to while fighting; therefore, in some cases, they could fight to death. They bite each other in the tail and head while fighting. The injury sustained could be severe in some instances, resulting in heavy bleeding. If this is left unattended, the gerbil could suffer from anemia and eventually die.

Gerbils might become uncomfortable in a tight cage. If they aren’t free to move around in the cage, they might switch to survival mode, trying to frustrate and eliminate the other gerbil.

If Gerbils are uncomfortable around each other, they could fight to death. This isn’t a strange occurrence among adult Gerbils introduced in the same cage. It is, therefore, safer and better to pair young Gerbils together. That way, they’ll get along before they fully grow and develop the strength to fight to death.

Gerbils could compete and fight to death for a couple of reasons. It could be for food or the hierarchical right to mate with a female. If this happens in the cage where there’s no escape route, the fight might continue until one of the two mammals die.

Is it OK to Keep 3 gerbils?

You can keep Gerbils in trios, especially if they’re siblings born together. They love being in the company of other gerbils, and it’s OK to keep three Gerbils in a cage provided there’s enough space.

Keeping a pair of gerbils is best. It helps to avoid declanning and prevent unnecessary competition. Two Gerbils living together seek the company of each other. However, it is also OK to keep three Gerbils in the same cage if it’s spacey enough to accommodate all.

Although you might face a little challenge when you put three Gerbils of different clans together. However, you can introduce three sibling Gerbils born together. This should also be done early because once they begin to grow, they might not recognize their siblings any longer and see them as strangers.

It is better to keep Gerbils on even numbers, like two or four. This will make it easier to pair in case of declanning. If you have four Gerbils in a cage, you can break them into pairs if there’s declanning. On the other hand, if you break up three Gerbils, you now have a pair and a single gerbil, in which case you may have to get one more gerbil for the lone one. The lone gerbil may struggle to get along with its new partner.

How Much Space Do Gerbils Need?

You need about 20 gallons of space to keep a pair of Gerbils. The floor surface of the cage should have a minimum length of about 70cm by 35cm. It should be 50cm tall. Remember, as mentioned earlier, Gerbils are social animals and love to run and jump around. They live in a large territory in the wild. For instance, in the wild, you could find a small clan of Gerbils living in a large territory, measuring about 325 square meters. Thus, they don’t like to be caged in a tiny space.

If you have enough space to keep a larger cage, you could opt for one. The indicated size above is the minimum size of a gerbil cage and doesn’t mean you can’t have something bigger. Therefore, putting your gerbil in a larger cage isn’t a bad idea. You could keep a pair of this little pet in a cage as large as 40 gallons or more, they’ll appreciate it, and it makes them happier.

How Many Male Gerbils Can Live Together?

One of the best combinations to maintain as a pet owner is a pair of male Gerbils. They are easier to manage and usually don’t have a problem staying together. They’re more peaceful than their female counterparts. Thus, if you have a large cage, enough to accommodate a large group of gerbil, you can keep a suitable number of male Gerbils in it.

In a group of many male Gerbils, there’ll usually be a male establishing itself as the dominant one. Other male Gerbils understand this hierarchy, and they live together in peace. However, sometimes, the top gerbil may have to show that he’s in charge, but that usually will not result in a conflict outbreak.

Declanning isn’t a common phenomenon you’ll find among male Gerbils pairs, but sometimes it happens. Therefore, to be on the safer side, rather than opting for a gigantic cage to keep many male Gerbils, it is better to get multiple cages, with each having the capacity to accommodate up to four Gerbils. Now, you can keep four male Gerbils in each cage. They’ll quickly get along, and they’re better that way.

How Many Female Gerbils Can Live Together?

Female Gerbils are more aggressive than the male; therefore, only two of this sex can live together. Keeping more than two female Gerbils in a cage could result in declanning, and if you refuse to separate them, conflict might erupt.

Some groups of Gerbils could get along together because Gerbils have different personalities. Some are calmer and more accommodative than others. The females could live together in a group if they’re siblings and introduced since they’re young. However, introducing a strange female gerbil with an already bonded group or pair isn’t a good idea. If you have to do that, then prepare a spare cage where you can separate them when they fight.

Can You Put a Male and Female Gerbil Together?

If properly introduced, male and female Gerbils rarely fight and will get along together. Therefore, if you’re considering pairing this opposite sex, conflict may not necessarily be a factor to draw you back. However, like in other mammals, Gerbils mate; you should expect this when you pair a male and female together.

While this, in itself, isn’t a problem, it becomes a problem if you don’t have a large cage to raise a large litter. This pet may give birth to as many as ten babies at once and still mate and get pregnant on the same day they gave birth.

Raising a baby gerbil requires so much sacrifice, namely, time, money, and energy. If you aren’t ready to make this sacrifice, never put a gerbil of the opposite sex in the same cage.

Can gerbils live alone after one dies?

Gerbils might become lonely and depressed if left to stay alone. Therefore, if you have two Gerbils in a cage and one dies, you should get a replacement for the remaining one as quickly as possible.

If you have more than two Gerbils in the same cage and one dies, it may not be necessary to get a replacement. The remaining Gerbils will still get along. However, if one of the two Gerbils living together dies, the other might become lonely and depressed. To avoid such, you should replace the dead gerbil with a new one of the same sex.

Although the two might fight for a while since they’re strangers to each other. However, if properly introduced, they’ll eventually come to understand each other, but that may take about three months. It is a better option than loneliness and depression.