Are you wondering if your budgie can be scared to death?

Has your budgie recently passed away and you wondered if he got scared and died.

Below I will cover everything you need to know

Can a Budgie Die From Being Scared?

If a budgie is scared for long periods of time it will trigger other negative feelings such as stress and poor mental well-being, the symptoms will lead your budgie to eat and drink less which will in turn affect their physical well-being.

During this time your budgies immune system will also be weak which will make them more vulnerable to illnesses and diseases.

Your budgie can also become disorientated, they might try to fly around the cage which will probably cause them to injure themselves.

Signs Your Budgie Has Died From Being Scared

If you are wondering if your budgie died from being scared the most obvious signs to look out for are how they behaved in their final hours and days.

If your budgie is showing the above signs it is important to not let them out of the cage as they might fly off.

It is also important to find the root cause and fix it, which I will go through below. 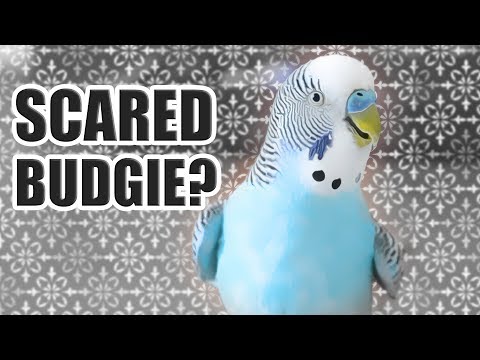 Signs Your Budgie Has Died From Being Scared

If your budgie has died suddenly it is important to find out what the cause was so you can prevent it from happening again if you have other budgies.

If your budgie die from becoming scared there are a few things that you can look out for, which include

Lying In Middle of Cage

If your budgie is lying dead in the middle of the cage, this could indicate sudden death such as being scared. Typically if a budgie dies from a long-standing condition they will die where they usually sleep.

The best way to reduce the risk of your budgie dying from being scared is to identify things that will commonly scare budgies and remove that risk.

The most common things that will scare a budgie include.

If you own other pets such as a cat or a dog it is recommended to place the budgies cage somewhere where they cannot get close to.

There is nothing more intimidating than a cat close to the budgies cage, dogs will typically bark which will scare the budgie, I recommend not putting the cage near the front door as this is where your dog will most commonly bark when people are at the front door.

Cage Next To Window

your budgies cage is next to the window sometimes they will look out of the window and we’ll see things that scare them such as big birds flying past.

If you live near a busy road, or near something that makes loud noises, be mindful that these noises will also scare your budgie.

If you noticed that your budgie has become stressed, a good way to reduce the stress is to put a blanket over the cage so the budgie cannot see out of the cage.

this will help too reduce the stress in your budgie as they will feel more secure in their cage and will not be able to see anything outside of the cage that might be causing them stress.

Can Birds Have A Heart Attack Because They’re Scared

Yes, a budgie can have a heart attack because they are scared.

If a budgie is scared it will put extra stress on their body including extra pressure on the heart. Typically this will not be an issue for healthy and young budgies, but if the budgie is ill or quite old it could be fatal for them.

if your budgie is scared for long periods of time it will cause them become weaker and weaker over time and the chances of them dying can increase.