Although rare, it is possible for a male budgie to have two females.

Can a Male Budgie Have Two Females? Typically a male budgie mates with two females rather than remaining loyal to a single female for life. While most male budgies are monogamous and share a bond with one female, there are always exceptions.

Is It Ok to Keep a Male Budgie Having Two Females?

Below are some reasons why you shouldn’t keep a male budgie with two females.

Keeping a male budgie having two females might lead to fights. Since female budgies are more aggressive, bossy, and possessive, it is likely that the two females fight over the male budgie. If the fight takes an ugly turn, they might end up bleeding or having injuries.

Lonely or Left Out Female

If a male budgie develops a liking for either of the females, the other female might feel lonely or left out. If that happens, it’s better to put the lonely female into a different cage and get her a mate too.

What if the male budgie breeds with both the females? Besides jealousy between the two female budgies, it will also lead to more babies, in short, more budgies to look after. Moreover, it could pose a problem for you if you are uncomfortable with the idea of breeding budgies.

Will they Get On?

I don’t think that a male budgie and two female buddies can get along. As discussed earlier, female buddies are more territorial, dominating and aggressive. Therefore, having more female budgies can result in fights.

If I Have Two Female Budgies Can I Get a Male?

No, you shouldn’t do that mistake. Having two female budgies with a male budgie is not ideal and I wouldn’t suggest that. Firstly, having three budgies together is a lot of crowd and you should avoid it. Secondly, it will lead to favouritism or the male budgie preferring one of the females more, resulting in anger, jealousy, hatred and loneliness in the left-out female.

How to Introduce a Male Budgie to Two Females?

There are different ways of introducing a male budgie to two females. Let’s have a look at them!

You shouldn’t straight away introduce a male budgie to two female budgies. This applies to introducing a budgie of any sex to a flock of budgies. You should keep the male budgie in quarantine for a month before you can even think of introducing him to the females to prevent diseases.

Get them Used to Seeing Each Other Daily

Let the Three Budgies Be Outside their Cages for Sometimes:

If you plan to put the male budgie in the same cage after the three get familiarized, make sure the cage size is big enough for them to live peacefully. Also, ensure that there is enough food for all three of them to avoid them fight over food. 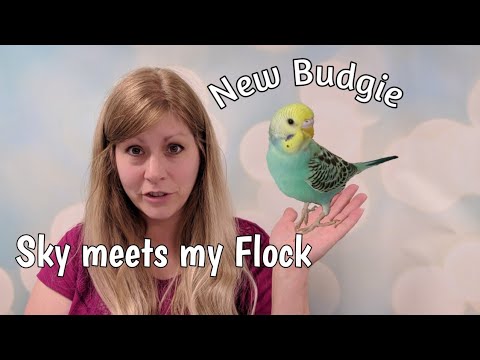 Which Sexes of Budgies Get on the Best?

Can Two Male Budgies Live Together?

In short, male budgies can stay in perfect harmony with each other. Also, you would love to see their bond of brotherhood and friendship. Interestingly, male budgies also don’t mind sharing their food and feeding each other.

How Many Male to Female Budgies?

In case you have an unequal number of male and female budgies, always keep more males with fewer females as females fight more.